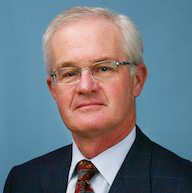 Dr. Wilson, a native of Port Colborne Ontario,  received his medical degree from Queen’s University in 1977 and completed his residency education in Urology in 1982. Following a year of further training at the Mayo Clinic, Rochester Minnesota, he joined the Faculty of Medicine at Queen’s in the Department of Urology in 1983. His clinical interests are in urinary stone disease and voiding dysfunction related to neurological disease and maintains a joint program with Dr. Karen Smith of the Department of Physical Medicine and Rehabilitation for this patient population.  He was appointed Department Head in 1997 which he held until 2012. He was President of the Clinical Teachers Association of Queen’s University from 1992-94 during the establishment of the Alternative Funding Plan for Queen’s University physicians and was an active negotiator with the Ministry of Health and Long Term Care for the AFP. From 1995 to 1998 he was Associate Dean of Postgraduate Medical Education at Queen’s. He was Chief Examiner of Urology for the Royal College from 2000-2002, Chair of the Specialty Committee for Urology 2002-06. He was President of the Canadian Urological Association in 2002 and President of the Northeastern Section of the American Urological Association 2007-08. In 2010 he was awarded the Lifetime Achievement award of the Canadian Urological Association. He has been Chair of the Credentials Committee of the Royal College (2002-2006), the Committee on Specialties (2008-2013). In 2013, he retired from Queen’s University but maintains an ambulatory clinical practice. In 2014 he was appointed as Chair of the Education Committee and Vice-President (Education) of the Royal College, and continues as a member of the Council of the Royal College. He was Vice-chair of the Investigation, Complaints and Resolutions Committee for the College of Physicians and Surgeons of Ontario (2011-13) and is currently holds the position of Medical Advisor for the CPSO.